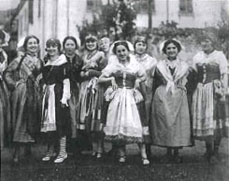 The City of Lanzo Torinese (525 m above sea level) is 31 km from Turin. Commercial and industrial centre, and place of residence at the mouth of the three valleys of the same name, has a population of over five thousand habitants. Lanzo, called "Lans" in Piedmontese and Franco, has been known since the Middle Ages as the site of the textile and mechanical and as a summer resort. He is currently one of the most famous centers of the valleys of the same name, much frequented by lovers of winter sports and hiking. Lanzo is the base point for visiting the valleys: Val Grande, Valle Viù, Val d'Ala and the Valle del Tesso. They meet each others in picturesque villages, hamlets, pastures, connected by ancient mule tracks and paths that also witness the geographical location which was based on the communicative organization and production and that took place in these mountains for centuries. The high peaks of the Alps Graie and shelters: Daviso, Gastaldi, Cibrario, Tazzetti and Salvin, allow climbers to engage in challenging climbs. Winter sports are practiced thanks to the skilifts, rings of cross-country skiing and ice skating rinks at Pian Benot, in the Valle of Viù, to Ala and Balme, Val d'Ala, Chialamberto and Val Grande. During the summer you can also restore your spirit and body in the tourist reception structures of these villages. Lanzo is watered by streams Tesso, Uppia and Stura. Above the last one the most famous architectural in the country is built: the Devil's Bridge. Legend tells that this medieval bridge was built in one night by the devil himself because his daring realization was almost inconceivable at the time, but more likely his name seems to refer to the exclamation "To hell with the bridge!", pronounced by the villagers annoyed by the increase in duty on wine, need to meet the cost of construction. Also called the "Bridge of the Roc," joins the slopes of Monte Basso with those of Buriasco, and is included in the homonymous regional protected area of Parco della Mandria. 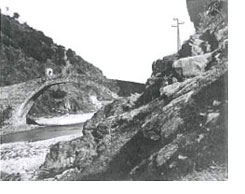 The structure dates back to 1378, when the cupboard Lanzo ordered the construction of a bridge linking the village to the right bank of the river Stura. See the strategic importance of the work, Amadeus VII, Count Green, personally became interested in the project, participating spending. The bridge is about 16 meters high and with a range of humpback of 37 meters, was a necessary step for anyone wishing to reach the lowland valleys and vice versa, and this at least until 1820, when the road Cirie-Torino was finished. Some archaeological finds of weapons and pottery, coins and inscriptions prove that the area of Lanzo was occupied at the time of Julius Caesar.
Many centuries later, Lanzo itself was the object of contention between the bishops of Turin, the Lords of Monferrato and Savoy. The domain of the Prince's family, began in 1046 following the marriage of Adelaide of Susa and Oddone of Savoy and strengthened through their children who come into Piedmont with feudal rights than with real power. After the brief domain of the territories lanzesi by William, Marquis of Monferrato, another marriage, between John of Monferrato and Margherita of Savoy, led, in 1296, the return of Lanzo under the control of Savoy. After the untimely death of John, Margaret granted the Statutes and took care to strengthen the fortifications of the Borgo and restore the Castle. 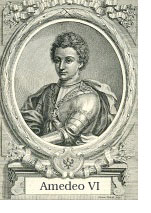 Amedeo di SavoiaOn the death of Margaret (1349) her small "state" returned to Savoy, specifically to Amadeus VI, who confirmed the Lanzesi Statutes. In November 1361 is written a painful page for this community: fierce company of fortune, perhaps subsidized by the Monferrato, violated at night making the walls lanzesi killings, rape, arson, looting. In the castle remained barricaded Count Amadeus VI with a large entourage of nobles and soldiers (among them the Prince of Acaja), and at the conclusion of hostilities, the Count and his entourage managed to save the lives and regain their freedom by paying a very strong sum of money. Subsequently, French troops occupied the entire Piedmont, destroying nearly all the castles, including that of Lanzo in 1559 and 3010, with the intervention of the Duke Emanuele Filiberto, the Savoy with the peace agreement Chateaux Cambresis (1559), entered in possession of Piedmont, and therefore also of the castellania of Lanzo, which was entrusted to the powerful family of Provana. Subsequently, the castellania was the dowry that Emanuele Filiberto granted to his daughter Mary, who married Philippe d' Este and the Government of the Este family lasted 150 years characterized by ineptitude and greed of the rulers. 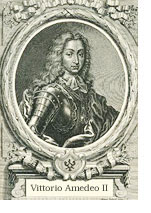 In 1720, Victor Amadeus II of Savoy to cover the budget allimentare of the Duchy, declaring null and void all the concessions bestowed upon payment by his predecessors, deprives the Vlarchese d'Este by his feud dividing the Castellania lumerose in counties that are sold to the highest offerrente with its noble title. The Marquis of Lanzo is assigned to Giuseppe Ottaviano Cacherano della Rocca (founder of the H), subject to the payment of the high sum of 65 thousand dollars. In the time of the French Revolution, on the passes of the Valli di Lanzo troops Savoy nothing will when Napoleon Bonaparte (1796) the routs, starting Piedmont the occupation of Italy. With the return of the Savoy 1814), Vittorio Emanuele I and then (1821) Carlo Felice, was built the roadway Lanzo - Turin (1820) with the great bridge over the Tesso (1823), designed by the architect Moscow, and later with the King Vittorio Emanuele II, Lanzo was also the rail link. Important pastoral work in the parish priest, Don Federico Lanzo Albert (1820-1876), recently beatified, and Don Giovanni Bosco (1815-1888), who opened the first office of the Salesian missionary nuns.
800 During the process of industrialization economy develops lanzese. Since 1812 active in Lanzo tooling Savant and towards the end of the century the Prussian industrial Remmert to plant some important textile mills. In addition, many participating lanzesi and fall in the wars of Independence, in the colonial and the two World Wars of the last century. On its mountains, between houses and villages, meet the first partisan groups to fight the war of liberation and not a few lanzesi end up in German concentration camps without returning to their families. Then with the reconstruction, following the slow economic recovery and the workers of the big factories of Turin, displaced in the valleys, returning to work. Some of them open small workshops which sometimes become factories. Today, among the remains of a medieval tower covered by the characteristics lose, some ancient churches of great artistic value, the narrow streets of the center, a bridge over the Stura bold, are the oldest evidence of a community that deserves to be known and appreciated. For his role in the resistance to the City of Lanzo Torinese, May 10, 1976, he was awarded with the Decree of the President of the Silver Medal of Valor.
Among the many characters of the long history lanzese, are those by Bartholomew Bonesio, the Marquis Giuseppe Ottavio of Cacherano and that of the Blessed Federico Albert. The Bonesio, lived mostly in Rome in the service of Cardinal Aldobrandini, Lanzo returned in 1605, he built the Capuchin monastery on the ruins of the ancient castle. At the convent gave a pension of 2,000 crowns and the picture kept in the parish church of San Francesco. The Count Joseph Round or Cacherano of Osasco della Rocca, was the Marquis di Lanzo and founder of the hospital. 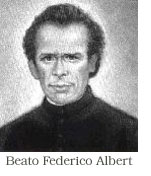 But the most beloved character from lanzesi is the Blessed Frederic Albert, the priest and theologian born in Turin on October 15, 1820, he was elected Vicar of Lanzo in 1852. Strong personality, deep culture and spirit sensitive to the social problems of his time, allowed to become the protagonist of community life. Not far from the hospital realized the Hospice of the Orphans, to give a home and a sound education about forty children without family; also founded the kindergarten and created a female Educandato, where the young people of lanzese receiving education and healthy moral principles. All these works were created by Blessed Albert entrusted to the Vincentian Congregation of the Sisters said, also founded by the Vicar Albert. Appointed Bishop of Pinerolo by Pope Pius IX, Frederick Albert September 28, 1876 died prematurely falling from scaffolding erected by builders who performed the work in the oratory of the parish.